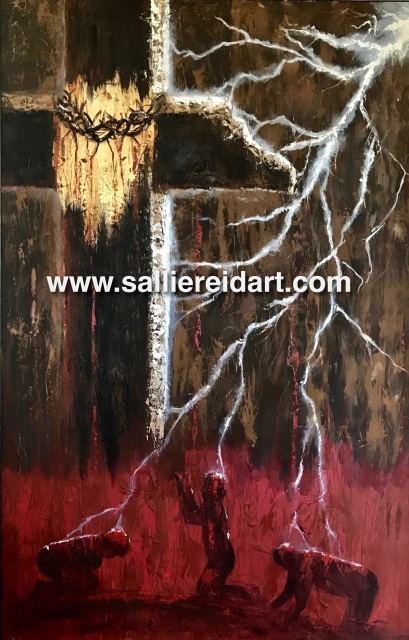 “The Broken Cross” by Sallie Reid

The inspiration for this painting came in three parts during a six week interval. I didn’t know what the whole painting would be until completion. I first saw the brown, red, and white swatch, but didn’t know what the colors would look like together. I have learned over time to paint what I see and trust that somehow it will come together. The painting remained this way for two weeks, and then I knew I could overlay more brown tones. I dripped the red paint, but still no new enlightenment. The painting remained that way for another two week period of time. I felt the crown of thorns would be a part of the imagery, but I didn’t know how. Finally, one weekend, I felt the nudging in my heart to finish the painting, but I had a previous engagement with some friends. I felt challenged between heeding the promptings in my spirit or joining my friends. I knew what I must do, but it was a hard decision for me. As I sat down to paint, the cross appeared to me. I knew at that moment the crown of thorns would go over the cross. I began to paint the thorny crown, and the presence of the Lord fell so strong around me, I could no longer stand. I was in worship with my God. I felt impressed at that time to depict my worship posture on the painting. I did, and as I finished, I was taken back to the day Christ was crucified. It was as if I could feel the earth shake, hear the thunder, and see the flash of lightening in the sky. The presence of the Lord was so strong it felt as if the electricity was on my back exactly as it was detailed in the painting. It was a powerful moment for me with our God.

Two weeks passed before I was inspired with the meaning of the painting. The interpretation was as follows: the broken cross is symbolic of us as a broken people. The remnant of His garment is the remnant of people who desire to allow their own brokenness to be re-deemed by the blood and empowered by His Spirit to take authority over the enemy. This victory can then be shared with others who have had similar issues and need breakthrough for themselves. The good news is the encounter of His healing love that never runs out.

God does not cause the pain, but He will redeem us if we allow Him. He will use it as a testimony for others if we submit our will to His. He desires to restore us to our original design, a son or daughter of Abba Father—and He wants us to help others to achieve the same kind of freedom!

“His love never runs out. All of you set free by God, tell the world! Tell how he freed you from oppression, then rounded you up from all over the place, from the four winds, from the seven seas.” Psalm 107:1-3 MSG